The Uncity blog is the voice of those who have forsaken the Urban Frantic for the Rural Rustic. 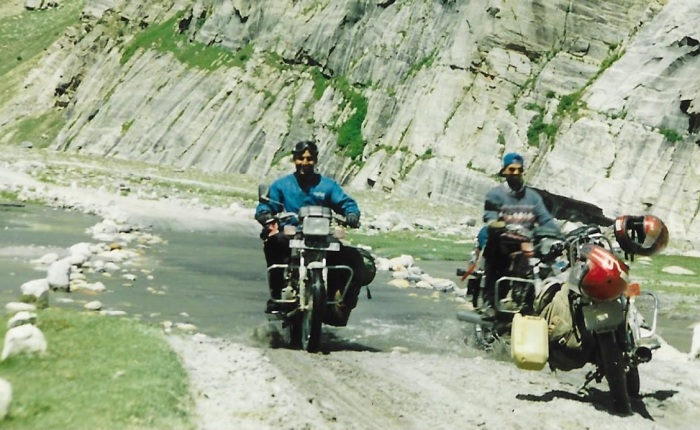 My fantasies often involve motorcycles. Each of us is wired differently and that is what makes us interesting. Motorcycling is wired into me. I have been a biker forever – have owned bikes through my twenties and thirties.

Too many motorcyclists are now the classic 40s mid-life crisis variety. The getting-old-fast or prove-my-manhood thing. But to me motorcycling is not about showing off a fancy set of wheels or making a lot of noise. Nor is it about being a part of some club.

I just like being on two wheels. I want to ride alone, in a place where nobody sees me or my bike. On a quiet mountain road in a high altitude cold desert. When I kill the engine I want to hear my own breathing. I want freedom to stop when I want, camp where I like. Be by myself with just my words. I don’t want people to talk to.

It calls. And I am heading there to heed that call while it still retains its pristine beauty. The hordes haven’t arrived there yet, but I fear they will.

My bike is a bit of an unknown. The Himalayan is new, and might spring some surprises yet. But the initial two weeks of owning it have inspired confidence. I have tried to mitigate the risk with spare parts and some training at Royal Enfield workshops (the RE crew has been awesome).

This trip will be about riding and writing. I want to make good time in the Robert M Pirsig way. In “Zen and the art of motorcycle maintenance “ he famously says “We want to make good time, but for us now this is measured with emphasis on “good” rather than “time” and when you make that shift in emphasis the whole approach changes.”

So  I hope to write. Another project I really look forward to is doing a photo series. In August 1994, driven as much by ignorance as foolishness, a set of 3 friends – including a 23 year old me- had done a much longer bike trip on 100 cc motorcycles. In that trip we rode through Spiti and then continued to Ladakh, and on through Kargil-Drass to Kashmir, to finish at Jammu.

I plan to click pictures of the 1994 spiti locales during this ride (E.g. the featured pic above). It will be fun to see how then and now compare. One sample of the change :

The KB and Himalayan are decades apart, and a small comparison is interesting :

As you can imagine, I am looking forward to this ride.

Here is another interesting comparison.