Innocence, Sex, and my Uncity kids

Kids grow up quickly in cities. The hardness of the place. The ambient ribaldry. Shorter tempers and better(?) vocabularies mean quicker access to four letter words. And thoughts.

I think the “Rate of Losing Innocence” (“RLI” drawls the smug MBA) for both my kids has really gone down since we moved a year and a half back. It becomes obvious when we meet city kids.

Recently a visiting teenage intern asked A (my 9 year old son) if he had a crush on anybody. A immediately responded “mummy”. While I completely echo his sentiments, I am pretty sure a city kids reply would’ve been different. And when the intern tried to needle A about whether or not he had a girlfriend, it didn’t really work because A actually couldn’t relate to the concept.

My kids had learnt expletives like fuck while in Gurgaon. Those have largely faded from memory but still crop up sometimes, especially after some urban contact. But the good news is, that vocabulary building stopped there. Here in the village they have learnt some local abuses, but the simpler, more harmless variety. Nothing compared to what some city kids mouth. Thankfully we are not in Punjab!!

Of course, curiosity still exists. “Where do babies come from” and “How are babies made” and other such questions. Healthy, natural curiosity. But answers are easier to come by because both my kids saw a calf being born, and understood more about childbirth than a 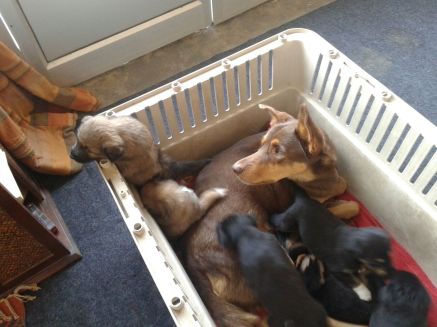 classroom would ever teach. I hope they grow up knowing that breasts weren’t designed for dirty magazines – they already know breasts have a biological purpose when our pet Fia nursed her six puppies.

On the flipside, the gender definitions here are stronger and the kids have adapted. When we left the city my daughter R – who was six then – had always referred to herself in the male gender “main khaoon ga, main khelooon ga” etc. But within two months of moving she had changed to the feminine. I ride a bike and she finds that cool, but out here seeing a woman on two wheelers is much rarer than in a city, so she has actually asked me

“Papa, can girls also ride motorcycles?”  or others like

That conformity to a more traditional way of thinking and gender stereotypes is something I don’t like as much. We influence that to some extent by our actions. Last month we went for a three day rock climbing course in Nainital which the kids really enjoyed – especially R.

An old african proverb says ” It takes a village to raise a child”. And when a village does raise children, they are will obviously be village kids. In balance, I think that is a good thing.

(My better half Dr. Vandita Dubey is a US Licensed Psychologist. Rupa recently published her book on kids and sexuality. The book is not about the rural-urban difference but on sexuality in general, and how parents can deal with it. You can check it out at http://vanditadubey.com/dr-dubey-on-parenting/  and also see the counselling  and workshops she offers on the link above.)

Chetan Mahajan Chetan Mahajan is a writing coach, author, blogger, and writer at large. He writes for many mainstream publications including the Readers Digest and the Hindu Business Line. He is the co-founder of the Himalayan Writing Retreat ( http://www.himalayanwritingretreat.com/ ). He also loves speaking to audiences about failure and learning from it.
Published August 6, 2016August 13, 2016

3 thoughts on “Innocence, Sex, and my Uncity kids”